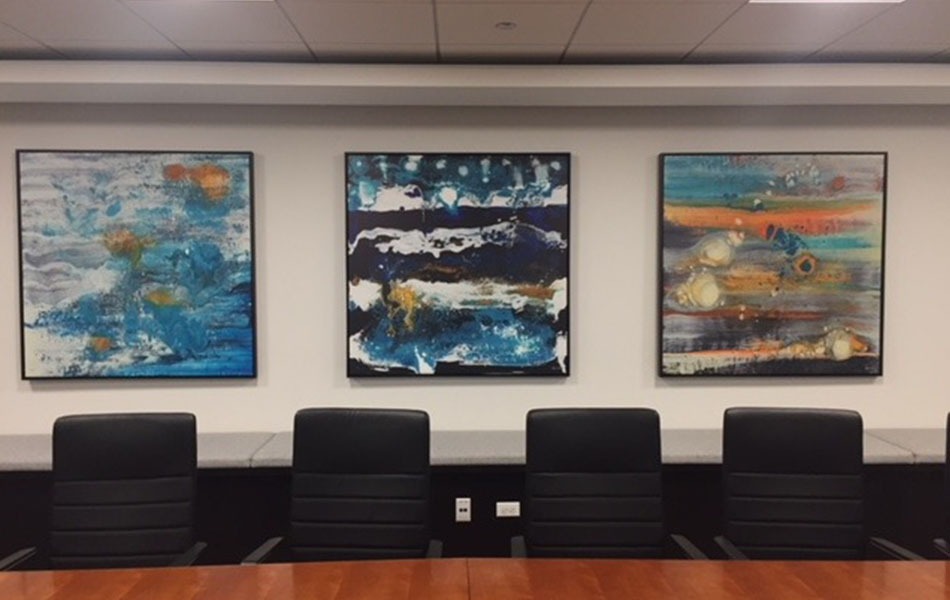 During an office expansion in August of 2018, Mark McKenzie, the Office Administrator for the Chicago office of Loeb & Loeb LLP, their CAO Connie Sheehan, and one of the firm’s principles, Doug Masters began to source art for their office space. They had purchased the prints of Chicago photographer David Phillips through a consultant during a previous expansion in 2010 and they decided to source photos from Phillips’ collection for this new project. “We wanted to finish our new space in a way that was consistent with the artwork on our other two floors, which is all black and white photography of Chicago throughout its history.”

Doug, Mark, and David walked through space when it was still comprised of exposed drywall and the offices and conference rooms were only written on blueprints. During the course of several meetings, they sifted through David’s recommendations until they found the perfect images for the soon-to-be-completed offices. David Phillips, who was an assignment photographer for Monsanto for several decades and owns a massive collection of historical photographs, recalls the collaboration, “I have a rather extensive collection of glass plate negatives, some ninety thousand that I had been collecting since the 1950s. They called me up when they added another floor, so I did about thirty more pictures.”

“One of the collections included a set of wet-plate negatives of the Chicago Fire. I collected four negatives from when the photographer shot from the top of a Chicago building that hadn’t burned. Those were 5″ x 7″ wet-plate negatives. He shot the series like a panorama, so he got a wide view of the aftermath of the Chicago Fire. It’s really incredible.” David described a large-scale canvas artwork that features in one of Loeb & Loeb’s conference rooms. Many of the photos fall within the late 1800-1900s with glimpses into Chicago’s rebuild after the fire, the World’s Fair, and the white city, and sneak peeks into the streets and lives of the city’s people.

The nameplate was installed by Prints Unlimited next to the panoramic canvas.

Loeb & Loeb had also worked with our company for custom framing in the past and connected with us later that year in order to consult on framing solutions for the photos. After the construction of the floor was completed, our salesperson Bunny visited with Mark and spent time grouping the photos by theme. When the project was completed we had framed exactly 147 photos for Loeb & Loeb’s Chicago office space. “When we got the photos here on-site, Bunny and I spent what may have been five-plus hours in the new space with all those photos, kind of walking the space and deciding what fit best and where.”

“I really enjoyed working with Bunny on the project. She’s very passionate and knowledgeable about what she does. I could tell she was excited about this job.” Bunny made it a point of being present to help place the framed photos. She took into consideration elements like how the lighting would hit the wall or how to balance multiple framed images on one wall. When choosing moulding options, Bunny helped them choose an ebonized walnut that complimented the black and white photography and even recommended security hardware to position the art flush against the wall so they would never shift. “We both put a lot of thought into why these pictures went where they did.”

“There was a lot of positive feedback,” Mark noted that there is a genuine curiosity among the attorneys and staff at Loeb & Loeb about the stories behind the photos and he is happy to oblige occasional questions. “When I walk through and look at the photos, it reminds me of how really cool this collection is. We’re very proud of what we have.”